The railway from Basingstoke to Andover and beyond

For many years, the L&SWR and GWR contested the territory to the west of Basingstoke. The line which now runs through Salisbury to Exeter marked out the northern border of the L&SWR's territory. Whilst it was only the third line chronologically to come to Basingstoke, it became the L&SWR's premier line for a while, and brought the L&SWR into direct competition with the GWR for traffic from Devon and Cornwall.

Having brought the railway to Basingstoke with the intention of heading off westwards, it may seem surprising that when the L&SWR built a railway to Salisbury, it did not originate from Basingstoke. That line, opened in 1847, connected with the L&SWR main line at Eastleigh (which in those days was called Bishopstoke).

This soon changed. Mindful of projected GWR incursions into their territory, the L&SWR gave their support to an independent company which had wished to connect at Basingstoke, the London, Salisbury and Yeovil Junction Railway. The LS&YJ was a "mania" company of 1846. Work started on the line, but by mid-1848 it had to stop, because there was an economic depression in the wake of the mania, and the L&SWR was just one of many companies which had bitten off more than it could chew and was now facing the consequences.

Having been promised a railway, and now with no foreseeable prospect of receiving it, the people of Andover began to look for ways of resurrecting the scheme, including taking over the railway. By 1851, the L&SWR was sufficiently worried about the possibility of losing the LS&YJ that they undertook to finish* what they had started. Eventually, they got around to honouring this promise, and with Locke as engineer and Brassey as contractor, work was under way, and a line was opened to Andover in 1854, reaching Salisbury in 1857.

* “undertook to finish”: the people of Andover, having once been disappointed, ensured that the L&SWR would face financial penalties if the line did not reach them by 1854. The reliable Brassey delivered the line in time to avoid these penalties.

Intermediate stations provided when the line opened as far as Andover were Oakley, Overton and Whitchurch. 28 years later, a station was opened just beyond Whitchurch, called Hurstbourne, serving the two villages of Hurstbourne Priors and Hurstbourne Tarrant. There were many developments along this line, and a good number of interesting branches, but all are outside the area covered by this history. Within the area covered  by this history, Whitchurch saw competition from the GWR in the form of the Didcot, Newbury and Southampton Railway. Some measure of the co-operation between the companies at that time may be gleaned from the fact that the GWR passed under the L&SWR very near to the end of the station platforms, and it would have been good for passengers changing between the two routes if a station had been built there. It wasn't. The GWR station was built three quarters of a mile south of the L&SWR line, and people transferring between the two needed to be fond of hills.

Next to the line at Overton, the Portal's bank note paper mill was connected to the line for a while. Although the connection no longer exists, and the tracks have been lifted, one can still tell from the layout of the mill where the trains used to go.

The L&SWR used to compete for speed with the GWR along this line, and at the turn of the century a flyover was built at the junction with the Southampton line to ease pathing and timetabling. A serious accident at Salisbury in 1906 brought the races against the GWR to an end.

The line was treated as the flagship of the SR when that company was formed, probably because it was the longest line on the system. From 1925 onwards, resources were devoted to the line - new locomotives, first the King Arthur class and then the Lord Nelson class and much marketing. From the summer of 1926, the main service on the line, the 11.00 from Waterloo, was marketed as the Atlantic Coast Express, which not only had a ring of quality to it, but also had the useful initials ACE. Speeds began to rise again in the SR period, and 90 miles per hour was not uncommon for the ACE on the downhill stretches. This premier status has been lost today, mainly because after nationalisation the line west of Salisbury was transferred to the Western Region. This split the management of services on the line, which reduced co-ordination. Additionally the Western Region now had control over a line which was in competition with its main line; from its point of view, this was a needless duplication, so in some places the tracks were singled, and several stations were closed*.

* “closed”: One of these stations, Templecombe, has since been reopened, largely as the result of a campaign by the locals.

In the area covered by this history, two of the four stations, Oakley and Hurstbourne, have been closed. Hurstbourne had in the meantime been a junction station when the Northern and Southern Junction Railway was opened thence to Fullerton. This was principally constructed to ward off threats of southern GWR expansion, and like the Basingstoke and Alton Light Railway, it did not survive long past the depression of the 1930's. From time to time, there are murmurings about the possibility of reopening the station at Oakley, to serve the growing settlement there; the station buildings are still standing on the up side, and a remnant of the platform is in place on the down side. 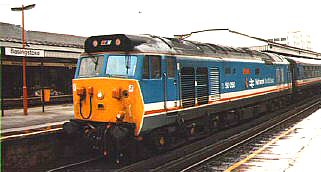 50 050 Fearless at Basingstoke in a version of Network SouthEast livery
working a service from Exeter to London during the late 1980's... 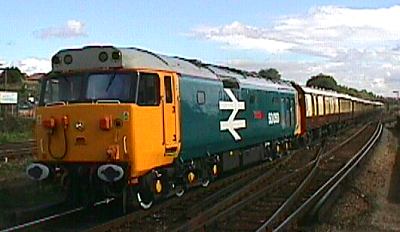 ... and the same locomotive, now preserved and returned to an earlier livery,
hauling an "Orient Express" special train through Basingstoke
en route to Southampton Docks on 10 September 1998.

Diesel replaced steam on this line during the 1960's. A variety of different classes were used over the years, from "Warship" class diesel hydraulics, to diesel electric classes 33, 47 and 50. When, towards the end of the 1980's, the class 50 diesels were nearing the end of their useful life, the decision was taken to purchase new diesel multiple-unit trains in preference to electrification. These new trains had longer coaches than their predecessors, with the result that stations all along the line had their platforms lengthened. At Overton, this was the spur for a complete reconstruction of the station, in which the substantial building on the down platform was demolished, creating extra space in the station car park. Fortunately, the elegant station buildings at Whitchurch have been retained. These look all the more dignified now that development of modern buildings housing offices and light industry have taken place in the vicinity. 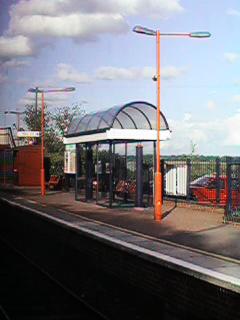 The new shelter on the down platform at Overton station,
which has replaced a much more substantial building.
Photograph taken 1 June 1996. 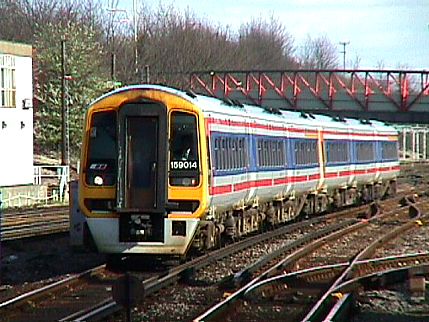 A six-coach class 159 train, made up of two 3-car units,
arriving at Basingstoke en route from London to Exeter on 4 March 1998.