A Cuckoo in the Nest

Today, the line which connects Basingstoke with Reading is a vital link in the national rail system. For most of the day, there are three trains an hour each way, of which two are the local shuttles, and the third is a longer-distance service which could extend to Brighton, Portsmouth or Poole in the south, and Birmingham, Liverpool, Manchester, Leeds, Newcastle or even Scotland in the north. Despite this importance, there was at the start no certainty that the railway would be built, and even when it was open, these long-distance services were impossible for a good few years.

The L&SWR proposed a branch from Basingstoke, via Newbury, to Didcot in 1843, with an eye on the traffic to be gained from the Midlands and the North*. A company called the Berks & Hants Railway proposed two lines from Reading at more or less the same time - the first connecting Reading with Newbury and Hungerford, and the second a connection from this line at a point called Southcote Junction to Basingstoke. The B&H was effectively an offshoot of the Great Western Railway, and was formally absorbed by that company before a rail was laid. When these rival proposals for a northward railway from Basingstoke were considered by Parliament, as had been the case with the L&SWR's projected branch to Bristol, the GWR scheme was preferred. Royal Assent was granted on 30 June 1845, making this a "mania" railway. The engineer for the line was Isambard Kingdom Brunel, and the contractor was Rowland Brotherhood.

* “Midlands and North”: Oxford, a few miles north of Didcot, was soon to gain a connection to the London and North Western Railway. If the Didcot line had been built, no doubt an extension to Oxford would have followed quickly.

With Brunel as engineer, this meant the line was built to his favoured broad gauge* of 7 ft 0¼ ins, rather than the 4ft 8½ ins gauge already in use at Basingstoke. This in turn ruled out any possibility of the GWR sharing the facilities at Basingstoke - even if relations between the GWR and L&SWR had been friendly enough for the question to arise. In consequence, the GWR facilities at Basingstoke duplicated much of what the L&SWR already had there, on more or less the same site*. The GWR station was built to the north of the L&SWR station, with the result that the systems were insulated from each other, with no question of crossings. There were two tracks, nominally for arrivals and departures; these were served by an island platform between the main and smaller platforms on the outside. An overall roof was provided. When the line first opened, the only intermediate station was Mortimer, more or less half way between Reading and Basingstoke. The buildings here were also designed by Brunel, and were much larger than required by that small community as a result of negotiations with the Duke of Wellington.

* “broad gauge”: For the effects this had on the service provided, refer to the section of this history devoted to competition between the railways.

* “site”: given the lie of the land, it is hard to imagine where else in Basingstoke the GWR could have sited a station without incurring even worse engineering works than they had; as it was, the station was approached in a broad, deep cutting. If the GWR had crossed the L&SWR and continued towards the top of town, they would have had the added expense of constructing viaducts through the centre of the town.

During its first few years of operation, this was a quiet railway*, but once Parliament had ruled that the standard gauge in Britain was not to be the GWR's broad gauge, the southward spread of standard gauge from the Midlands was assured. Standard gauge trains reached Oxford in 1852, running on mixed gauge track, and Basingstoke in 1856. This allowed through trains to run from Basingstoke and beyond on the L&SWR system to the industrial heartland of the country. The through traffic in those early days was all goods. The GWR also took to operating standard-gauge trains on the line, and by 1869, the broad gauge rail was deemed unnecessary and was removed.

* “a quiet railway”: The line did merit a short mention in George Measom's "Illustrated Guide to the Great Western Railway", published in 1852. The citation is concerned mainly with the wealthy landowners whose estates bordered the railway.

A goods siding was provided at Bramley, and in 1895, a passenger station was opened there. When passenger trains started to run through from the L&SWR to the north in 1902*, they did not generally call at the main station in Reading. In consequence, a station was opened at Reading West in 1906 for passengers wishing to reach Reading. In addition to the passenger services operated on the line, there were other types of traffic which over the years have resulted in sidings being built off this line. At the Reading end, there was a GWR goods depot called Reading Central, which was connected to the Reading to Basingstoke line slightly north of Southcote Junction. In addition to these goods sidings, there was a connection near Reading's main station to the Huntley and Palmers* biscuit factory. South of Southcote Junction there were two military installations, which are dealt with in another section of this history, and a private siding to a brickworks in Daneshill near Basingstoke.

* “1902”: The first through service was Newcastle to Bournemouth, which was sponsored by the Great Central Railway, and used its coaches.

At Daneshill, there were two short sidings parallel with the running lines. These were connected to the running lines at their southern end, and were connected together again at their northern end, from whence a single track ran 400 yards or so to the brickworks, finishing next to one of the kilns. This brickworks took advantage of the same clay and sand formation which had caused the landslides on the L&SWR line for its raw materials. The siding was operated from the end of 1908 to the end of 1942. As of 1997, there is a cement works on the site in Daneshill, but with no apparent trace of the former connection to the line.

The GWR station at Basingstoke ceased to be used during the 1930's, with GWR trains being diverted to a platform in the SR station. Much of the site of the GWR station and goods yard is now given over to car parking. Until a few years ago, there was a terminal for delivery of stone, but this has also disappeared under Tarmac. One relic which is still visible is the base of the GWR signal box, which stands next to the modern (1960's) signal box in the vee of the lines to London and Reading and is used as a store room.

Whilst this has always been a connecting railway, rather than a main line in its own right, it has, as mentioned at the start of this section, risen in importance over the years. Perhaps it is a little unfair to regard it as merely a connecting railway to the north, for it is possible, given favourable circumstances, to get from Basingstoke to Paddington in 55 minutes or so, including the change at Reading, and there is actually little to choose as regards the distance from Basingstoke to London* by this route - 51¼ miles as compared with 47¾ from Waterloo.

* “ London ”: In my researches, I have not discovered evidence for through trains from Basingstoke to Paddington. In the early 1900's, the GWR did operate trains which carried on from Reading in the direction of London, but these terminated at Windsor. 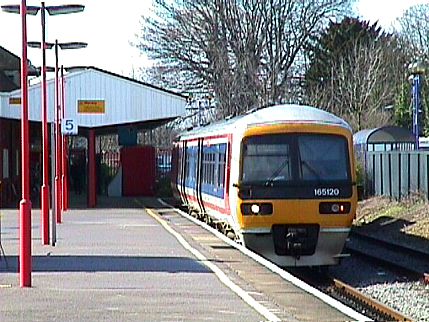 The all-stations services between Basingstoke and Reading
are the province of class 165 diesel multiple-unit trains.
Here is two-car set 165 120 at Basingstoke on 11 March 1998.
The red booth visible in the background is for a ticket collector
to supervise the new gate at the car park side of the station
which was provided when the through tracks on this platform
were blocked in the late 1980's.